From the 7th to the 14th of September, 14 young coders met in Vaumarcus, Neuchâtel, for the “Girls Camp” of the Swiss Olympiad in Informatics (SOI). We asked some of them what they learned in the camp, what informatics means for their future and what they think about events specifically for young women.

The participants of Girls Camp (All Photos: Swiss Olympiad in Informatics).

Participant Priska Steinebrunner, who conducted the interviews, with leader and EGOI organizer Stefanie Zbinden (on the right).

Did you already know how to code before Girls Camp?

Yes. But here I learned more during one week than during a whole year of school!

What are your plans for the future?

I probably won’t study informatics, but medicine in Geneva or Lausanne. However, I think if you aren’t sure whether you want to study informatics, then this camp will give you a good impression of what to expect. Informatics is actually not my favourite subject, so I probably won't take part in the SOI, but I'm glad that I was here. When the leaders give you a piece of information and you can use that to achieve something for yourself, it's a great feeling!

This camp is exclusively for young women, and Stefanie Zbinden from the SOI also told us about the European Girls Olympiad in Informatics (EGOI), which will take place for the first time in Zurich next year. What do you think about such events?

I think that they are a good idea. For me personally, it's no problem to compete with boys, but I know that it's motivating for many girls to be among themselves. In computer science and the natural sciences in general, you usually meet fewer women than men. So I think it's good to these types of events in a scientific environment. 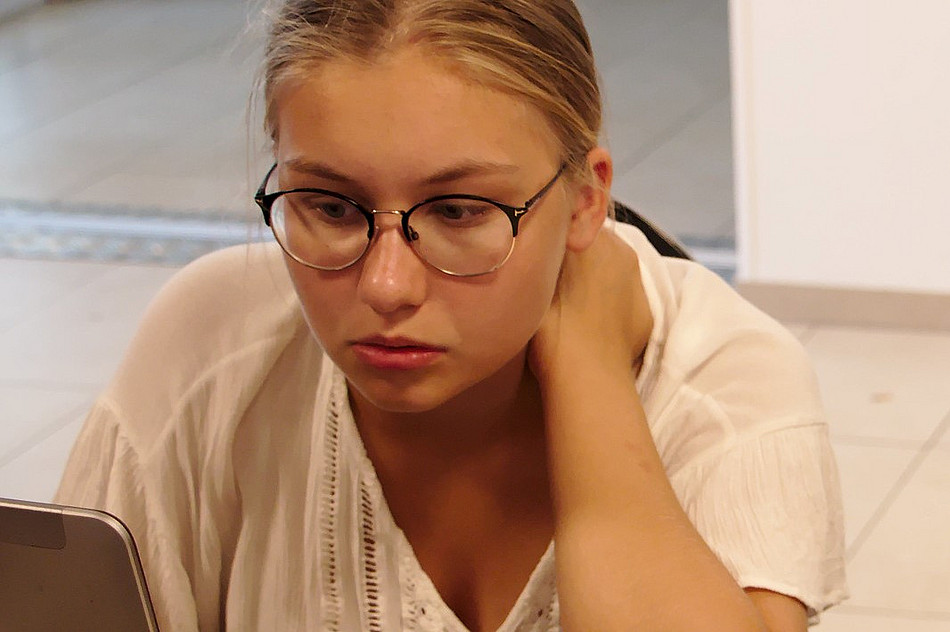 What progress have you made this week?

I learned about many new algorithms and implemented them. During the first few attempts I often needed help, after that I worked as independently as possible.

What do you like about the Girls Camp? Why do you take part in SOI events?

We do some serious coding, but it never gets dry or boring. We have fun doing it, for example when you discover a funny bug during a coding session and can laugh about it with the others. We have a good sense of community and it is not too competitive. Of course you want to do well at contests, but the point is to do your best, not to beat the others. It's been great to meet new people, but also to reencounter people I already knew from previous SOI events.

Do you think it's easier to make acquaintances in a camp for girls?

Yes, I would say so. I have been to the SOI camp in Sarnen before, and there I mostly hung out with the other female participants. I appreciate events like Girls Camp because I believe that many girls don't usually take part in competitions like the SOI, because they feel they are less competent or that it's not for them - which is simply not true! I also believe that EGOI is very motivating in this respect. For me, this international competition is definitely an incentive.

What was your personal highlight of the week?

The night when we lay in the grass and looked at the stars was very beautiful. We saw the Milky Way and Mars, and the moon was all red. 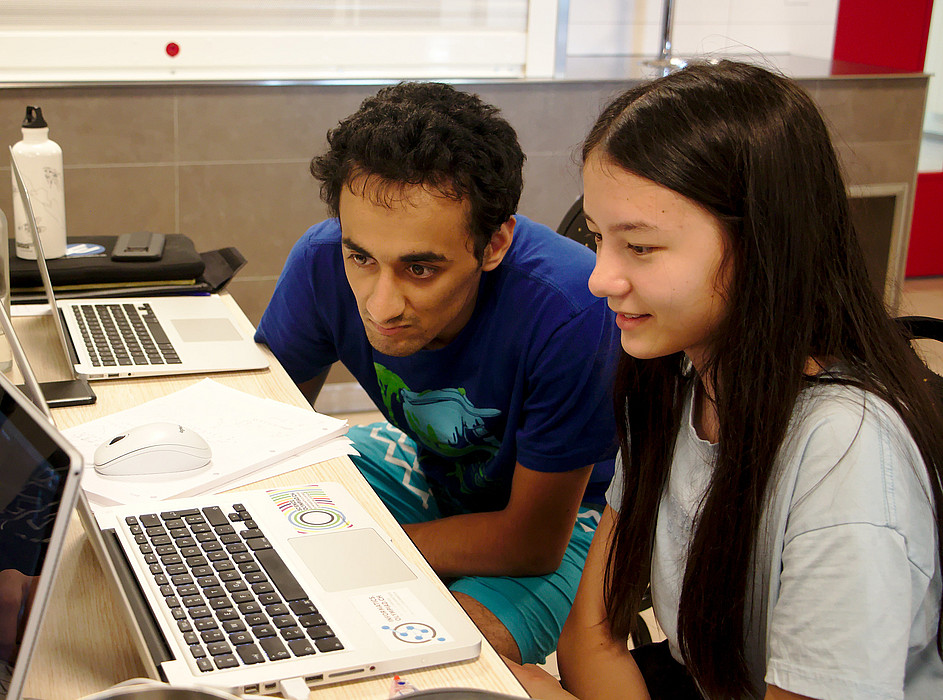 Sonja: It is very pleasant here and we’re having a good time. People from all over Switzerland are here, from different language regions. That’s interesting. For example, we talked about how informatics lessons look like in different schools.

How does the Girls Camp compare to the school?

Anda: At school, not everyone is equally motivated, so it takes longer to solve a task.

Sonja: At school we only have two hours per week, here we practice for six hours every day. I learned a lot about how to solve a problem analytically. Before the camp, neither of us had ever programmed with C++ either, only with Python. 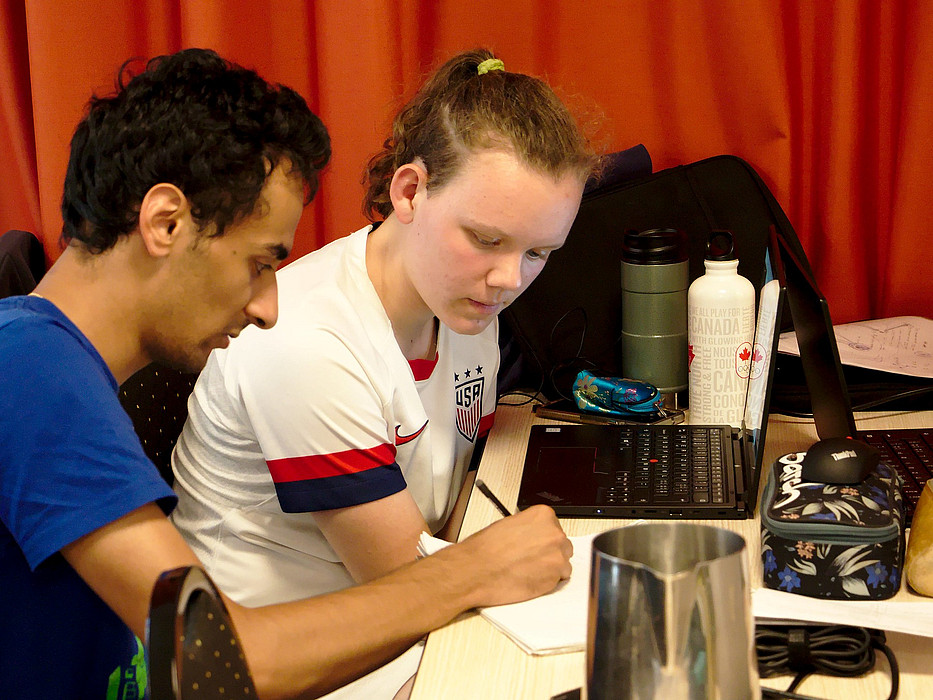 What do you think of events like the Girls Camp or the EGOI, which are specifically aimed at young women?

Anda: If you are interested in computer science but don't have that much experience and would just like to give it a try, then it can be intimidating to see more boys participating. You might have the feeling that you’ll end up being "the worst" if you take part yourself.

Sonja: Computer science is perceived as a "typically male domain". Events like EGOI can lower the threshold for female newcomers and also confront them with role models who make them realize: I can do this!

Will you participate in the SOI after your experience in the Girls Camp - or even study informatics at university?

Sonja: I will certainly have a look at the tasks of the first round, because I love a good puzzle. But I am not going to aim for the final round just yet.

Anda: I'm not sure what I want to study, but I will definitely continue programming in my spare time, just because it's fun. 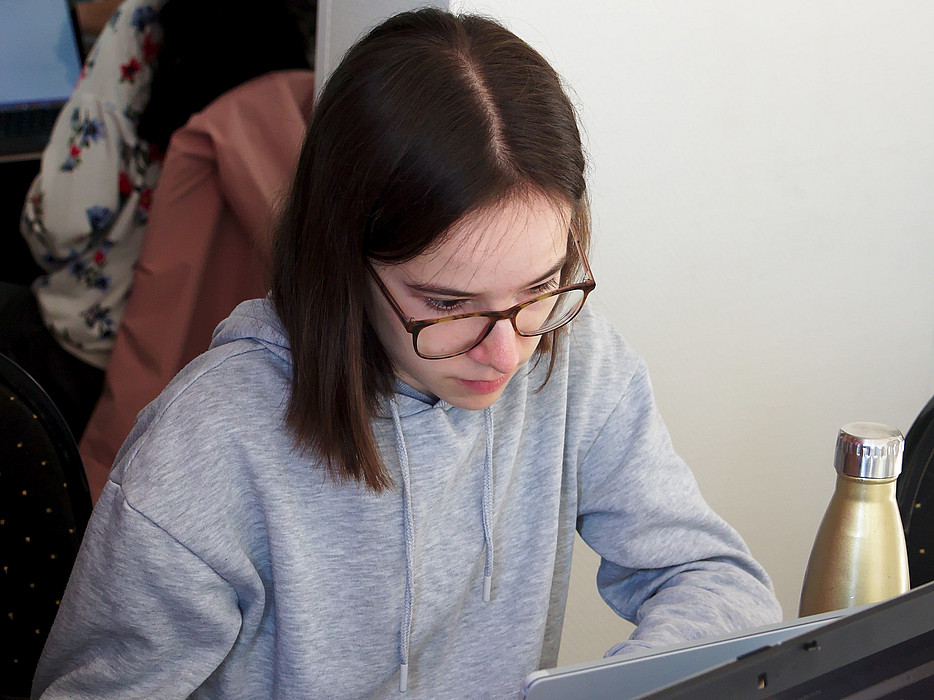 I am positively surprised by how open-minded the other participants are. The games in the evening and the sports breaks are a good balance. If you were to sit in front of the computer all the time, it would eventually stop being fun.

Is the Girls Camp very strict?

It is challenging, but I wouldn't call it "strict" because you can decide for yourself how much you want to challenge yourself. There’s no deadline like there is at school, we are here because we want to learn something of our own accord. We are taught about different aspects of informatics than what we learn at school. I like the informatics lessons at school. But it is still a rather new subject and there's room for improvement.

What do you think about the fact that Girls Camp is only for girls?

Boys and men are overrepresented in science. This can be discouraging, so it's cool to compete only with other girls for once. I don't think that girls can’t perform just as well as boys, but in society this prejudice sadly still exists.

Will you continue with the SOI and participate in the first round? Do you have ambitions?

Yes, it’s fun! As long as I have done my best, I am satisfied with my result. If that also means I make it to the next round, that's an additional reward. Besides, I can participate again next year and try to improve. 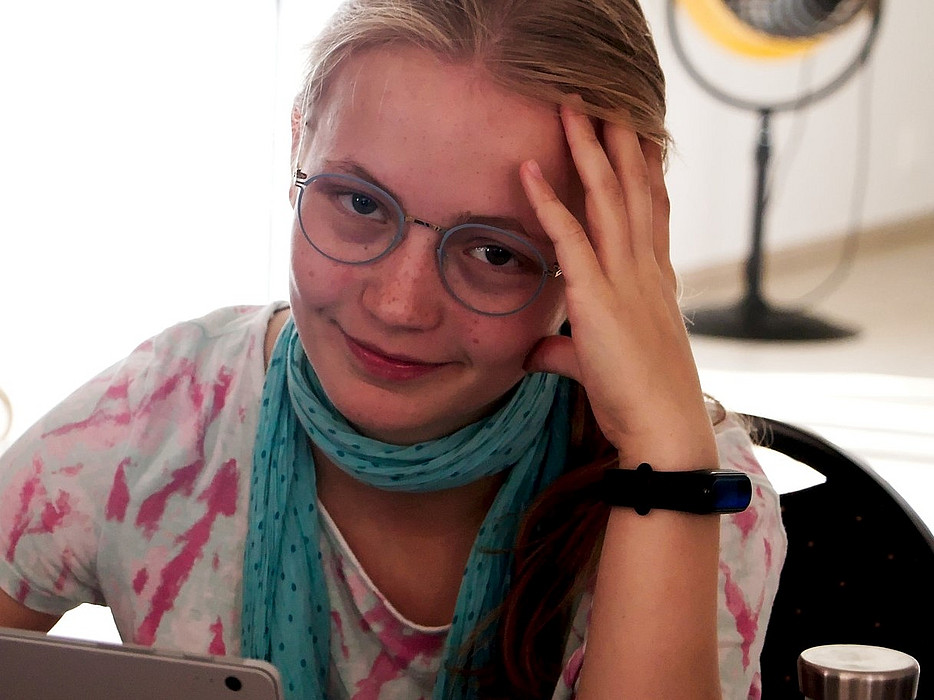 What was memorable about Girls Camp?

Joanne: I will certainly remember the day we went swimming in the lake! And of course that I learned so much about informatics. For example, I now know what Binary Search is. I joined Girls Camp as a beginner. There is still a lot to learn, but I have made so much progress during this week.

Elina: I will remember the camp in general because I really had a good time here. I liked the people, the games, the atmosphere ... I hope that I won't forget my new coding skills either. I'm quite a beginner as well and have learned a lot of new things.

How does learning at Girls Camp differ from normal school lessons?

Elina: I think people are more motivated here. In a normal school camp, they probably wouldn't want to continue working until late in the evening.

Joanne: When we have questions, the leaders help us, but otherwise we really work very independently. 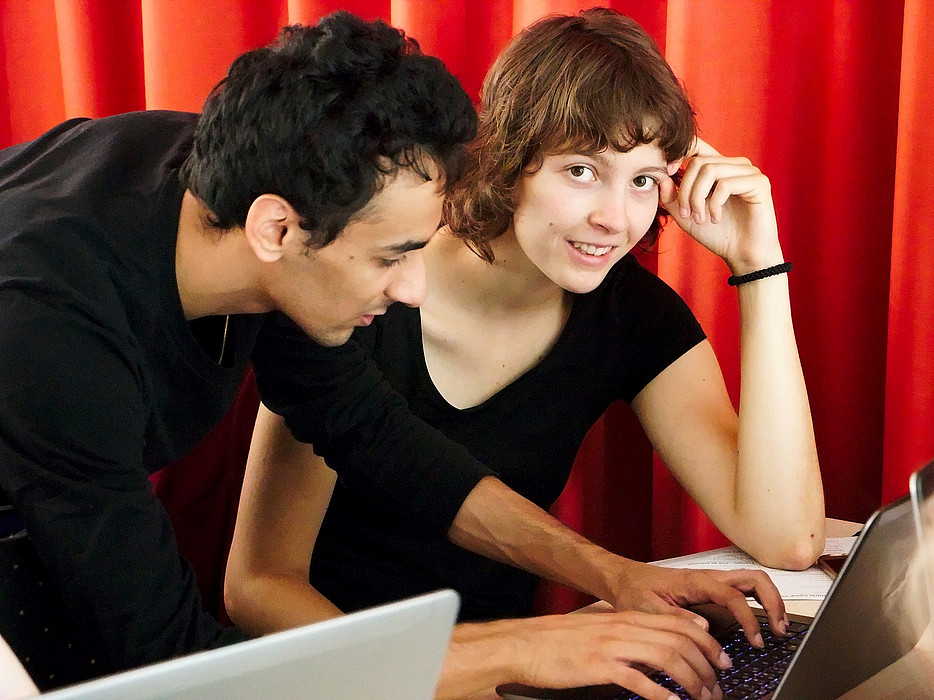 What do you think about the fact that there is a camp like this specifically for young women?

Elina: I think it is very important. We think that our society is equitable, but in reality, a lot of areas have not yet been reached by that change.

Joanne: It's also just fun to be here with all the other girls!

Did you learn anything here that will help you in the future?

Joanne: I would like to study business, and some informatics knowledge is very useful when you have to analyse data, for example.

Elina: I hope that I will soon be able to use my computer science skills to visualise some of the mathematical problems I have tried to solve in my spare time. Or to help others, or to find a job. I have lots of plans for the future: After my Matura, I'd like to do a gap year abroad and then maybe study maths.

Will you participate in the SOI after your experience at Girls Camp?

Elina: It's probably a good experience, so why not.

Joanne: I don’t know if I have sufficient skills yet, but I'll give it a shot. 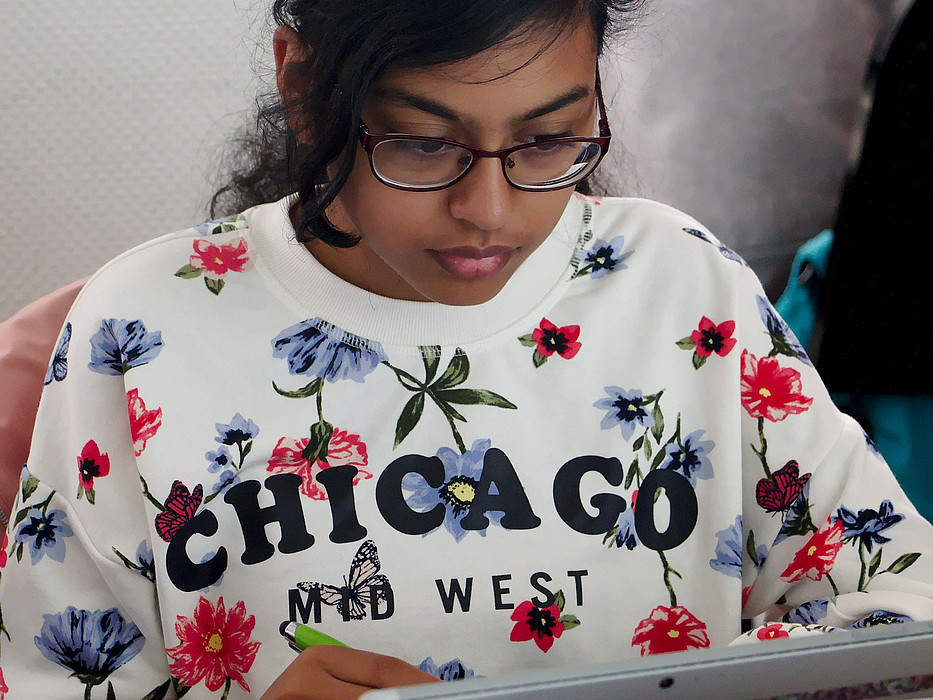 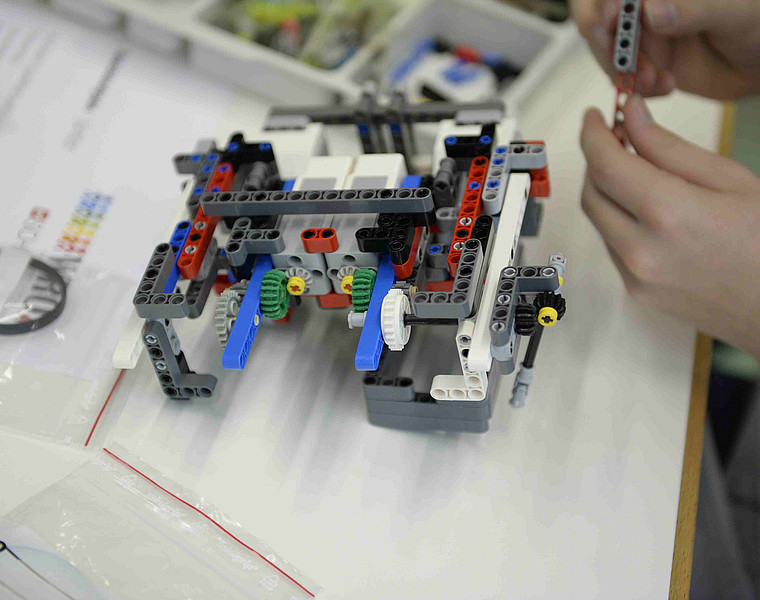 Results of the first round

This year 707 students took part in the first round of the Physics Olympiad. 130 of them received an invitation to the autumn training and second round. The threshold for a direct qualification was 8.4 points out of a maximum of 22 points. 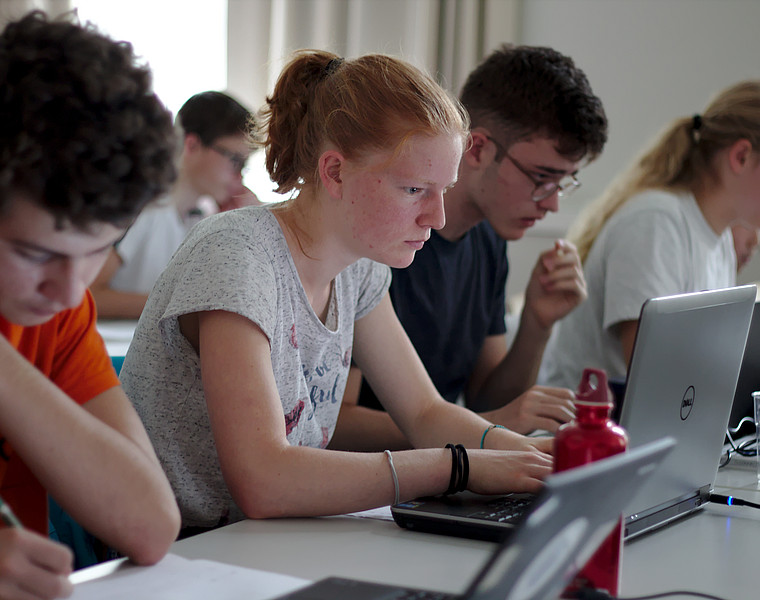 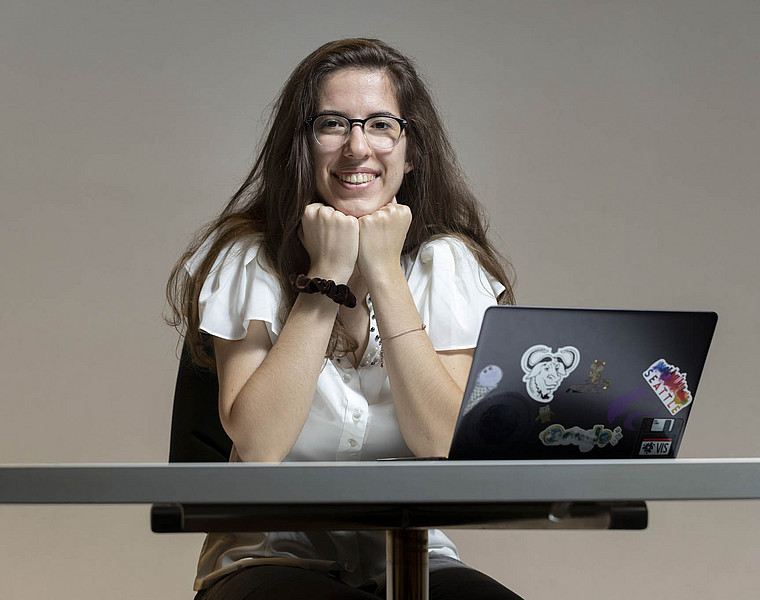 As children, she and her sisters competed over calculations and logic puzzles. Today, she passes on her knowledge to the next generation of mathematically gifted youngsters. Ivana Klasovita knows first-hand how valuable talent promotion in STEM subjects can be – especially for girls and young women. 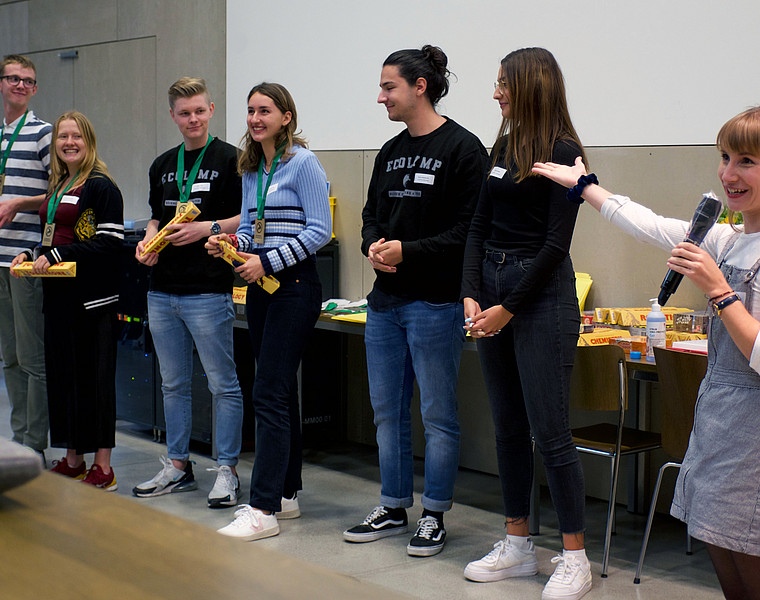 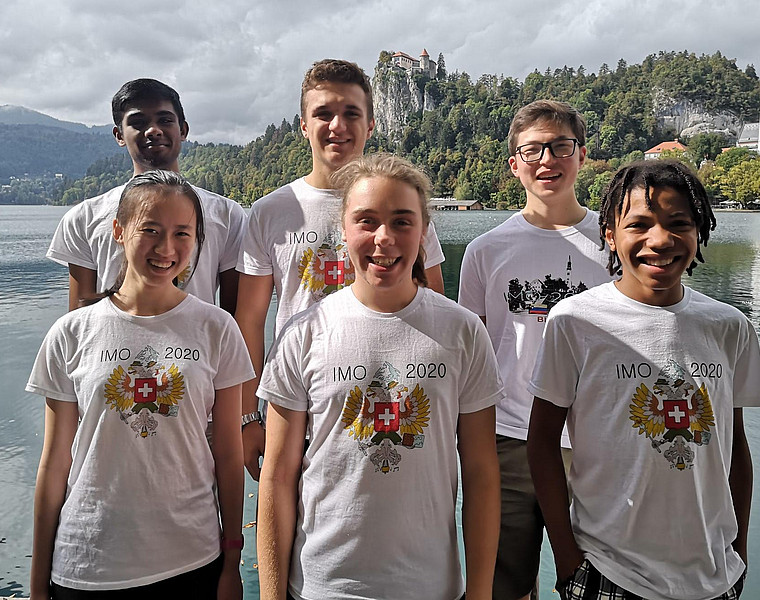