A strange recollection of the birth of a friendship

2015 was the Year of the Goat, given that it would contain perhaps the greatest Math Olympiad of all time. It would also result in me meeting one of my closest friends, which is not exactly the standard outcome from, of all things, a science camp. Nevertheless, the truth is very much stranger than fiction, and all preconceptions must be left at the door before the reader embarks on this strange recollection of the birth of a friendship.

Three years before: Tanish and Marco in 2015.

I was very much an awkward, gawky teenager at 14, resplendent with braces and frightful haircut. My French, whilst nearly fluent when it came to writing, was loath to surpass playground insults when it came to its oral usage. Despite all this, I found myself sitting in a classroom at EPFL in October of 2014, attending a most interesting class on Combinatorics, whose teacher was Louis Hainaut, now the President of the Math Olympiad. I have only one vague, detached memory of this time, and that is of him asking if anyone wished to show the solution to one of the problems. A bespectacled boy, who seemed to be about my age, was most keen to take him up on the offer, and Louis responded aptly with "I know you can solve it already!"

This greatly impressed me but at the same time, I felt an instant dislike for the boy; he was the quintessential nerd, and stood for everything I hated. It was because of guys like him that people thought all mathematicians were nerds; surely, he sat in his basement all day and read humongous volumes on quantum mechanics, seeing the sunlight only when necessary. I would later learn that his name was Marco Cavaleri, and he was considered somewhat of a prodigious talent, having represented Switzerland at the Middle European Mathematical Olympiad the year prior at the tender age of thirteen.

I did not see him again at the second class, though, and I thought that was the end of that. Come the exam in January, and I surpassed my expectations by scraping together 21 points, which was enough to qualify directly to the finals. My parents were both duly content (an event which, much like Halley’s Comet, occurs roughly once every seventy-six years) and I found myself standing on Platform 3 of Gare Cornavin a chilly morning in early February. I ended up sitting with my father a few metres away from the rest of the contestants from the Romandie, including the infamous Marco Cavaleri, to whom I had written an email a week before asking about when they were catching the train.

I was extremely timid and downright terrified of having to make conversation with them in French, and so I refused my father's repeated urges to go and sit next to them, choosing instead to play a football game alone on his iPad, much to his bemusement. Eventually, he went and introduced me himself, and asked if I could sit with them, to unanimous agreement. Mortified by this act of divine intervention that ensured I would have to now make conversation with them, I shuffled over and humbly introduced myself.

Little else in the form of conversation was made on my part until lunch, when the organisers led out the contestants towards the Mensa at ETH Zurich for the midday meal. Sijing, one of the Romands, declared that a burger was better suited for his appetite, and two of the others - amongst them Marco - agreed. I tagged along to Burger King for the first time in my life, and this simple act inspired newfound confidence in me. That night, I broke the ice by swearing loudly when I lost at cards; the others were most amused by this for reasons unknown.

During the week-long camp a month later, I slowly struck up a friendship with Marco over innumerable games of chess (most of them losses), YouTube videos where puppets satirised French politics and, of course, Mario Kart DS. At the end of the camp, I found myself singing "Aux Champs Elysées", by the eternal Joe Dassin, with Marco and a couple of Swiss-Germans that I had previously considered far too intelligent to be socially capable.

After the camp, we saw each other on the train every Wednesday (as we attended a course together at EPF Lausanne, albeit in different classes) but it was nothing surpassing an ordinary friendship. The next year, however, we ended up going together to the Middle European Mathematical Olympiad in Austria, and by the end of that week I realised that, overlooking his uncountably large number of flaws, Marco really was a cool guy.

On the last night, we nicked the German mascot (which is somewhat of a tradition) and my favourite memory of that competition is easily Louis, sprinting down the main street with the stuffed tiger—with four Germans in pursuit—only to be yelled at by the organizers, who screamed (far louder than I expected was humanely possible) at him to stop in his tracks. Later that night, the Czechs would make the mistake of repeating our actions; the German leader broke a glass on their door. Ah, the joys of international co-operation. Indeed, I was heartbroken when Marco didn’t make it to the International Math Olympiad the next year, although our attempts to take the tiger were far more successful.

My favourite anecdote concerning Marco (of those which I would be allowed to tell) happened when I went to France to surprise him for his 18th birthday. His face had not made itself available to the services of a razor in quite some time, and the result was the rather repugnant mess you get when you are halfway to growing a beard. I implored him to shave it off, but he professed that he was scared of my razor, as he only used the electric variety. Despite my repeated attempts to convince him that he would not be left permanently scarred afterwards, he stoically refused, until I offered to play him at chess for the opportunity to shave him. I should note here that Marco is far, far better at chess than I am, having learned from a grandmaster. I myself had never received any formal classes, and Marco had won the large majority of games played between us. Seizing the opportunity to make me stop asking him to shave, he agreed.

What followed next surpasses in intensity any world championship of chess to have ever been played. Thanks to a small mistake on his part, I found myself a piece ahead, and Marco, terrified, spent longer and longer per move in a vain attempt to protect his face. Nonetheless, I maintained my advantage, and nearly three hours later, checkmated him. In the bathroom, I smeared his grimy face with shaving cream, and prepared to shear him like the sacrificial lamb of biblical tales; he pleaded to be allowed to do the deed instead. As I did not particularly wish to force a razor on his face against his will, I made the minor concession. Horrified, he slowly raised the blade to his skin, sweat beading on his forehead. Five minutes later, he was washing up, confessing that he’d never shaved that well in his life, and his skin was the smoothest it had been in several years.

The bespectacled boy at the EPFL

By the time 2017 had rolled around, he was already one of my best friends, and nothing much has changed since. We’ve drunk together (not always juice, either!), climbed a mountain, gone to Romania for the IMO, gone to Oxford and spent 5 days in a mansion in France to ring in the New Year’s and stolen various mascots of other international teams. As it turned out, he wasn’t a nerd after all, although I take credit for his much-improved dress sense. It is a pretty unique friendship - I have my friends at school, and he has his, and then we know each other through math - but when university comes around and all my friends move out all over Europe and the world there will still be a bespectacled boy at EPFL, ready to explore mathematics with me.

About the author:
I’m Tanish Patil, an 18-year-old currently in his final year of school at l’Institut International de Lancy and planning to start at EPFL next year. I love mathematics but don’t think I’d pursue it as a career; I’d much rather work in finance or economics. Follow me on Instagram at @tanishpatil. 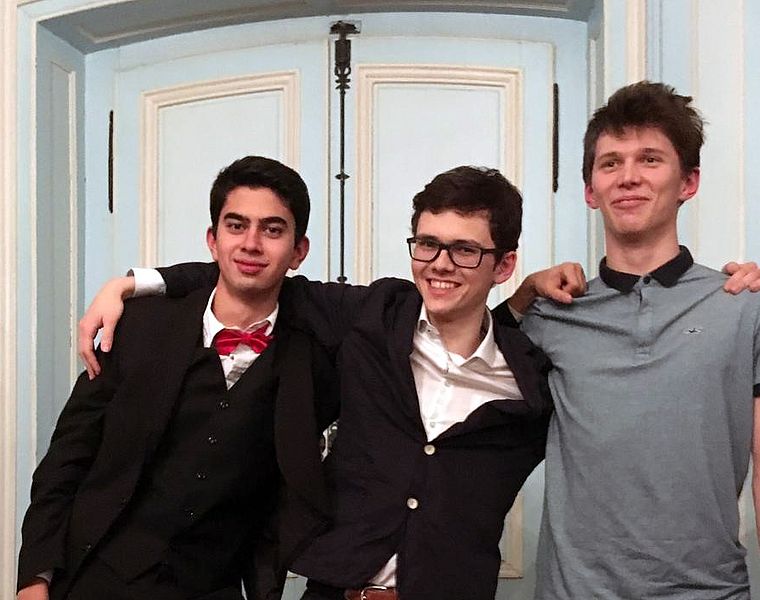 A strange recollection of the birth of a friendship

2015 was the Year of the Goat, given that it would contain perhaps the greatest Math Olympiad of all time. It would also result in me meeting one of my closest friends, which is not exactly the standard outcome from, of all things, a science camp.